The DOJ’s suit says Stone, who advised former President Donald Trump’s election campaign, had been making regular payments to the Internal Revenue Service on a tax debt of about $1 million.

But when Stone was indicted in January 2019 on charges that he tried to deceive Congress and and threatened a witness during investigations into alleged ties between the Trump campaign and Russia, he stopped making payments, according to the DOJ.

The suit further alleges that he failed to pay about $400,000 in taxes and penalties on his 2017 return.

After his arrest, Stone and his wife, Nydia, purchased and moved into a condominium near their prior residence in Fort Lauderdale, Fla., purchased by a trust Nydia controlled.

According to the DOJ, that purchase and others were fraudulent attempts to prevent the IRS from collecting money the Stones owed.

The suit also alleges that the Stones funneled money to a corporate entity they controlled called Drake Ventures. They used funds from that account to “fund a lavish lifestyle,” paying for personal expenses like spa visits, haircuts, groceries, restaurants and dentist appointments.

The DOJ is asking the federal court to require the Stones to repay the nearly $2 million they owe, plus interest and other “statutory additions,” and asks that the court declare the transfer of Stone’s residence to the Bertran Trust “fraudulent.”

“That my wife and I owe a significant amount in federal taxes has been a matter of public record for several years,” Stone said in a statement as reported by Politico. This is not news. We had worked diligently with the IRS to pay down our debt until we were financially destroyed by the politically motivated and corrupt Mueller investigation. The claim that my wife and I are living a lavish lifestyle is a laughable joke in view of the fact that we are virtually bankrupt. This is a clear sign that the smear campaign of ‘guilt by association’ to tie me baselessly to the illegal events of January 6th has failed.”

Stone also told CNN that his two-year struggle against the “Epically corrupt Mueller investigation” has left him and his wife on the verge of bankruptcy and that the description of this current lifestyle “will be proved to be ridiculous in court.”

Stone, who has worked on numerous Republican presidential campaigns dating back to Richard Nixon, was convicted on charges related to the DOJ’s Russia investigation in November 2019.

Days before Stone was to report to prison, Trump commuted his sentence.

Trump later pardoned Stone during his final hours in office. 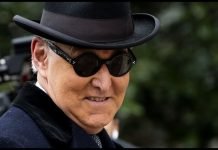