March 8 (UPI) — The Dow Jones Industrial Average gained more than 300 points on Monday amid rising optimism about reopening plans, while an extended sell-off of tech stocks dragged down the S&P 500 and Nasdaq Composite.

Markets largely reacted to the Senate passing President Joe Biden‘s $1.9 trillion stimulus bill over the weekend to send it back to the House and the Centers for Disease Control and Prevention announced Monday that people who have been fully vaccinated can meet safely indoors without masks.

Disney stock rose 6.33% to lead the Dow higher after California released new guidelines that would allow its Disneyland park to reopen in April.

Other stocks that would benefit from the widespread lifting of COVID-19 restrictions also benefitted as United Airlines gained 7.01%, American Airlines grew 4.99% and Target increased 2.47%.

The optimism surrounding reopening chances continued to dampen enthusiasm around major tech stocks such as Apple and Amazon, who were down more than 15% and 11% from previous highs respectively.

Investors have expressed concern that reopening may lead to a spike in stock prices that could lead the Federal Reserve to increase interest rates higher than expected.

“If you believe in this whole reopening and estimates of GDP growth … that means growth is less scarce,” Jeroen Blokland, a portfolio manager at Robeco, told CNN. “[Then the] value sector has at least the possibility to play catch up.” 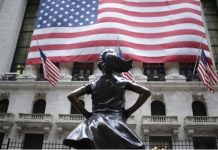