Appearing on “Fox News Sunday,” Murthy stressed that vaccine mandates are “not new” in schools, the military and workplaces such as hospitals after the 5th U.S. Circuit Court of Appeals ruled to stay the implementation of the order, pending judicial review.

“I think it would be a setback for public health,” Murthy said of the possibility the court could continue to block the mandate. “What we know very clearly is that when people get vaccinated and the more people who get vaccinated, the quicker we’re able to bring this pandemic to an end, the more lives we can ultimately save.”

Justice Kurt Englehardt wrote in Friday’s ruling that a stay on the mandate that private businesses with more than 100 employees get vaccinated against COVID-19 or face regular testing and wear a mask was “firmly in the public interest.”

Murthy on Sunday said that vaccine requirements “work remarkably well,” citing a 20% average increase in vaccinations among organizations that implement them and noted that one-third of Fortune 100 companies had put requirements in place without a federal mandate.

“What’s really at the heart of this for a vaccine requirement strategy is to create safer workplaces for workers, for customers, and to increase vaccination rates overall, because that’s ultimately how we’re going to end this pandemic,” he said.

The court’s decision comes amid a rise in COVID-19 cases in the United States with Nebraska, California and Pennsylvania each reporting weekly increases of more than 70%, according to data gathered by Johns Hopkins University.Overall the United States continues to lead the world with 47,064,901 cases and 763,057 deaths since the start of the pandemic, according to Johns Hopkins.

Murthy said that while numbers remain down from the peak of the wave brought on by the emergence of the Delta variant, a winter surge still remains a possibility.

“As winter does approach, people do go indoors, and virus is also better able to transmit in cold, dry air,” he said. “So, we know that increases the possibility that there will be spread.”

To date, 68.3% of the total U.S. population has received at least one dose of a COVID-19 vaccine and 58.8% of the population is fully vaccinated, according to Centers for Disease Control and Prevention data, as children age 5 and older became eligible to receive the vaccine on Monday.

Further, 15% of fully vaccinated Americans have received a booster dose, with people age 65 and older and others in high-risk categories eligible for the additional dose.

Some states, such as California, Colorado and New Mexico, have opened up eligibility for booster doses to anyone age 18 and older ahead of a federal recommendation.

While Murthy says he understands why those states have taken that step, he made it clear that the Food and Drug Administration is considering broadening the eligibility to include anyone 18 and older amid a request from Pfizer.

“They want to make especially sure that the booster shots are both safe and effective for the populations that are not currently eligible and once they determine that, then they will make a recommendation there,” he said, noting that “millions of people” are currently eligible for boosters. 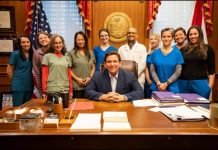