Jan. 23 (UPI) — A drone operator in Florida said he was trying to capture video of boats when he stumbled on a more shocking sight — sharks swimming around oblivious surfers.

Jason Griffeth said he took his new camera drone from his Vero Beach home to the Fort Pierce Inlet to capture footage of boats Friday morning when he decided to get some shots of surfers and paddle boarders he sighted nearby.

“As I got about 300 feet in the air, I noticed there was some big fish swimming out near the surfers,” Griffeth told WPBF-TV. “I was like, ‘Those kind of look like sharks.'”

The video, posted to YouTube, shows the sharks — and some large fish that appear to be tarpon — swimming all around the surfers and paddle boarders, who appeared not to notice their sub-aquatic company.

“And I was kind of freaking out because I had no way to notify the surfers, because I was so far away with the drone,” said Griffeth, who was about a mile away from the incident monitoring his drone via a video feed to his phone.

Griffeth said the scene ended peacefully, with the sharks and surfers leaving each other undisturbed. 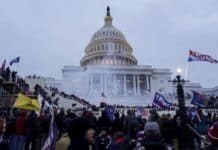