July 13 (UPI) — Drought conditions persisted in the Pacific Northwest on Monday, where notoriously rainy Seattle approached four weeks without precipitation and large wildfires burned out of control across the region.

The drought was already well-established two weeks ago when a deadly, record-breaking heat wave swept across the region and Canada’s British Columbia. Temperatures in the Emerald City topped out at 104 degrees on June 27.

Since then, temperatures have moderated but the drought has continued following state’s driest spring since 1924 and second driest on record dating back to the 1890s.

The last measurable rain in the Seattle region was on June 14; the longest it has ever gone without rain is 55 days in 2017, the Seattle Post Intelligencer reported.

Some 94% of Washington state is abnormally dry, with 35% of the state classified as being in an extreme drought, up from 22% last month, according to the National Oceanic and Atmospheric Administration.

Much as in California, where drought last week prompted Gov. Gavin Newsom to urge residents and businesses to reduce their water consumption by 15%, similar extreme conditions have led to a series of out-of-control wildfires in Washington and Oregon.

Federal wildfire officials reported eight major fires are burning more than 220,000 acres across the two states, including the largest — the Bootleg fire in south-central Oregon.

That fire grew to more than 153,000 acres in the Fremont-Winema National Forest and was 0% contained as of late Monday.

“Hot/dry weather and extremely dry fuels contribute to extreme fire behavior,” the U.S. Forest Service said in a Sunday update. “Conditions were so extreme that firefighters needed to disengage and move to predetermined safety zones.” 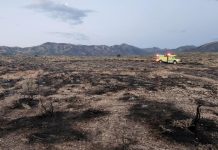 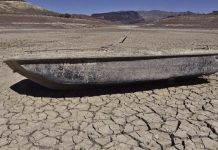