Lack of rain during the fall left farmers in Kansas, Nebraska, Oklahoma and Texas — where the majority of the nation’s winter wheat is grown — struggling to get their plants to grow.

“The rain shut off in July, and we hadn’t had any meaningful moisture until Thanksgiving Day,” said Kyler Millershaski, a wheat farmer in Lakin, Kan. “It’s been extremely dry.”

During that same period, rain pummeled the upper Midwest. States like North Dakota, which produces large quantities of spring wheat, experienced massive flooding, and farmers battled mud and ice to harvest their crops.

“The farmers are saying it was the most challenging harvest in a generation,” said Jim Peterson, the policy and marketing director for the North Dakota Wheat Commission. “We still have acres that have not been harvested. And the rain impacted the quality of the crop we did harvest.”

The two opposing — and damaging — weather patterns hit the two areas of the country that grow the majority of U.S. wheat.

In the lower Midwestern states, farmers grow winter wheat, which they sow around October. It develops its roots during the fall and then goes dormant during the cold winter months. It begins growing again in the spring and is ready for harvest around June.

Spring wheat, by contrast, is planted farther north in the upper Midwest — where winters are much too cold for winter wheat to survive. Like many commodity crops, it is planted around April and harvested in the fall.

The 2019 growing year was disastrous for spring wheat, with heavy rains and floods delayed and prevented farmers across the region from planting and harvesting.

“Farmers are resilient,” Peterson said. “But this is hard. We’ll probably see more farm auction sales for a while because of this.”

Farther south, winter wheat growers are in the midst of their growing season.

“Right now, it is in dormancy,” said Marsha Boswell, a spokeswoman for the Kansas Wheat Commission. “We’re just waiting. It’s hard to predict what will happen.”

But the conditions are not ideal, she quickly added. The fall drought meant much of this year’s wheat did not develop the roots needed to overwinter well.

“Some of [the plants] didn’t even come up,” Boswell said.

Farmers are watching their fields closely. They will need spring rains for their surviving wheat to mature.

“There is a lot of waiting and a lot of helplessness in farming,” farmer Millershaski said. “There are times when you know all you need is a half an inch of rain, and that will save the crop. And there’s nothing you can do about it.” 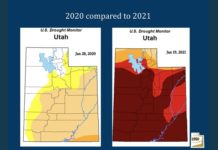 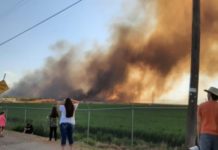 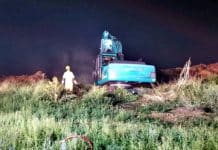