Seven decapitated corpses were found inside a taxi along a highway near a tollbooth in the outskirts of Manzanillo early Saturday, including the taxi driver, SDP Noticias reported.

Jalisco New Generation is considered one of the most powerful drug cartels in Mexico. Excelsior in 2015 reported the gang made an alliance with drug lord Joaquin “El Chapo” Guzman’s Sinaloa Cartel to help him escape from prison.

Jalisco New Generation, which traffics along the Pacific Coast on a large scale, was named responsible in the shooting down of a Mexican military helicopter in 2015, killing at least three soldiers. The cartel also retaliated violently to a government effort to curb its influence that same year. 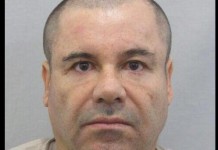