The Red Sea province, which includes the popular Hurghada resort, will start enforcing the ban on single-use plastics in June to fight pollution and protect the environment, government officials said. Heavy-duty garbage bags are exempt from the ban.

“It’s a fight against the sea of plastic that people carelessly discard,” provincial governor Ahmed Abdallah said. “And it all ends up in the Red Sea.”

He also acknowledges enforcing the new ban will be an uphill battle and didn’t elaborate how it will be accomplished. He said the effort could draw more environmentally conscious tourists to the seaside town. Egypt’s tourist reputation took a hit during extremist attacks after the 2011 Arab Spring.

The ban will be done in conjunction with the Hurghada Environmental Protection and Conservation Association, a non-government organization that specializes in conserving marine and land habitats.

The decision will “protect the threatened and endangered species, which are severely affected by ingestion, starvation, suffocation, drowning, entanglement and toxicity from plastic remains, which affects the human health accordingly,” HEPCA officials said.

Egyptians use about 12 billion plastic bags a year, which officials say pollute the Nile River, the Mediterranean Sea and Red Sea. HEPCA will launch an awareness campaign about the negative impacts of plastic on marine life and human health.

Mohamed Shehab, CEO of the Egyptian Environmental Affairs Agency, said the nation is committed to banning single-use plastic bags and will encourage the use of reusable bags and paper bags. The ban comes one day after New York State imposed a similar ban on plastic bags, and about a year after Britain instituted a plastics ban. 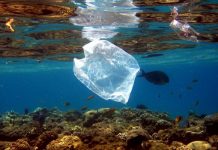