PARIS, Sept. 20 (UPI) — The Eiffel Tower was closed Sunday and put on a terror alert after rucksack-wearing climbers were spotted ascending the landmark, but a police search came up short, according to authorities.

“There were reports of three people climbing the tower from the outside from about 5.30 a.m.,” IANS quoted a police source as saying. “They were said to have large rucksacks so no chances could be taken. They completely disappeared, so inquiries are centered on them being extreme parachutists.”

Police evacuated the tower and conducted a search of the premises due to “fears that they may have left dangerous material on the tower before leaving.”

The BBC reports the search results were negative and the tower reopened in the early afternoon.

The Eiffel Tower has been threatened by terrorist groups before, including in June 2014 when French authorities said they foiled an al-Qaida plot targeting the popular tourist destination.

France has been on high alert following multiple terrorist attacks — and attempted attacks — on its soil this year. 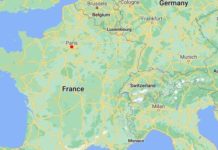