Jan. 20 (UPI) — Eight United Nations peacekeepers were killed and several more were injured in an attack in Mali on Sunday, officials said.

An unknown number of attackers in armed vehicles struck a base belonging to the United Nations Multidimensional Integrated Stabilization Mission in Mali, or MINUSMA, in Aguelhok in the northern part of the West African country on Sunday morning, the peacekeeping mission said.

“The peacekeepers neutralized many enemies and pursued the attackers in their rout,” MINUSMA said.

The mission added that those injured were evacuated to MINUSMA hospitals,

The Special Representative of the Secretary-General in Mali, Mahamat Saleh Annadif condemned the attack.

“This complex and cowardly attack illustrates the terrorists’ determination to sow chaos; it demands a robust, immediate and concerted response from all forces to wipe out the danger of terrorism in the Sahel,” he said. “In close cooperation with its partners, MINUSMA will remain proactive and will not let this barbarity go unpunished.” 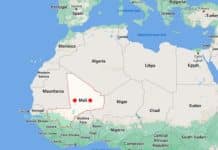