EL PASO, Texas — Oct. 2 (UPI) — There’s a spot on the U.S.-Mexico border in downtown El Paso, Texas, where separated immigrant family members have been allowed to gather a few times a year for a brief embrace across the international line or attend a yearly binational Catholic Mass.

So when the U.S. Border Patrol broke ground there in recent days to build a four-mile stretch of wall, many in the community were upset.

“It’s the worst place we want to see a fence,” the Catholic Church’s Bishop of El Paso Mark Seitz told UPI, calling the wall — 18 feet high, composed of steel bollards — “a scar on our land.”

Customs and Border Protection says the wall, the construction of which began Sept. 22, is necessary because the El Paso sector is seeing an increase in the number of illegal immigrant apprehensions. The see-through bollard wall will replace existing chain-link fencing that runs beside Chihuahuita, one of El Paso’s oldest neighborhoods, founded in 1818.

CBP said in a press release that seeing into Mexico “has proved beneficial to the Border Patrol to detect illegal entries, the smuggling of narcotics into the United States by providing situational awareness of activity south of the wall.”

Community groups had planned — and gotten permits for — “Hugs Not Walls” events and a cross-border Mass for October and early November at the point where the Rio Grande River bends through downtown.

Fernando García, director of the Border Network for Human Rights, said his group “conceived of Hugs Not Walls to bring together those immediate family members separated by immigration policies. Bring them together at the middle of the Rio Grande River, and especially at the river bend, where it is mostly dry, because the water is canalized, and bring them together for a few minutes so they can embrace and hug.”

The event has brought together 1,200 families for an embrace on five occasions since 2016, García said. Some 200 families had made reservations for the Oct. 13 event. He said the group wouldn’t cancel, but has not found a new location.

García said the network has been working with the Border Patrol for 15 years to build trust and community relations. At the end of last year, García said Border Patrol asked him to submit dates for Hugs Not Walls for 2018, which he did.

“Two weeks ago, Border Patrol came to us and wanted us to resubmit the request and there was no clear reason why, so I asked. They did not tell us anything about border walls. Nothing. Then we accepted it. … So they called us just a few days after and out of courtesy just before they did their press conference, they told us Hugs Not Walls was not going to happen because they were going to start the construction of the border wall,” García said.

The downtown portion of the wall is scheduled for completion in April 2019.

Mass moved back behind fence

The wall construction in the canal has also forced the binational Mass to be moved to its previous location, a place divided by a fence between Anapra in Juarez and Sunland Park in New Mexico.

“We had already put out some publicity about the binational Mass in the first Saturday in November. It’s disappointing. But the bigger disappointment is this new ugly scar across our city,” Seitz said.

“We used to have to celebrate the binational Mass at another location and we were divided by the fence there. We had the bishop of Juarez on one side of the fence, and I was on the other side, as well the Bishop of Las Cruces,” Seitz said.

“A few years ago, the possibility of celebrating the binational Mass right there in the canal, the Rio Grande, arose, and we pursued it with Border Patrol and we were able to receive the many permissions we need to be able to do that,” he said.

This year was to be the third binational Mass at the unfenced location.

“It was powerful to celebrate Mass in the canal … If the water cooperated, we had plans and permission to put the altar right literally on the international border. The Border Patrol and the Mexican counterparts had given permission for a number of us to be there right in the middle of the the river. People from the U.S. side would be on the bank on the American side and from Mexico on their side. We would be able to bring communion to both sides. It was just an amazing sign of our unity,” Seitz said.

The permitting process for binational events is onerous.

“We have to work with every agency on both sides of the border to make this event possible. The International Water and Boundary Commission, the Texas Department of Transportation, the railroad companies, the Policia Federal, the municipal and city governments of Juarez and El Paso, the Comisión de Agua, Border Patrol and Mexico’s immigration authorities. This was unprecedented engagement that we have here in El Paso,” García said.

Vanessa Johnson, an El Paso resident, attended Hugs Not Walls in February 2017, shortly after President Donald Trump’s inauguration. She said she went with her young son, Ethan, because he was “distraught about the idea of building a wall.”

“I wanted my son to understand that much about our immigration policy already created a barrier that had existed for many years and prevented loved ones from seeing each other, sometimes for years,” Johnson said.

“Hugs Not Walls was heartbreaking,” Johnson said, “but also a convivial atmosphere, and the organizers, Border Patrol, and participants were all respectful. You could feel the raw emotion of those who waited in line to see relatives.” 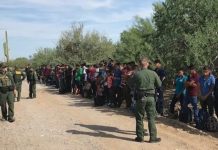 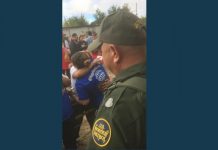 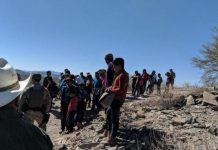