While firefighters were investigating, the explosion occurred.

“As they went to open up an underground electrical vault where there was supposedly the issue going on, there was an explosion,” officials told KTLA-TV. “They reported a minute or so later another explosion and they called for help.”

Witnesses told KNBC-TV there were two more explosions, which sent flames into the air.

Hundreds of people, many dressed in traditional German attire, were at the event at the time.

One event worker told KTLA she smelled what she thought was gas shortly before the blasts.

The injuries were described as minor. 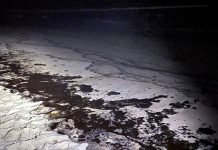