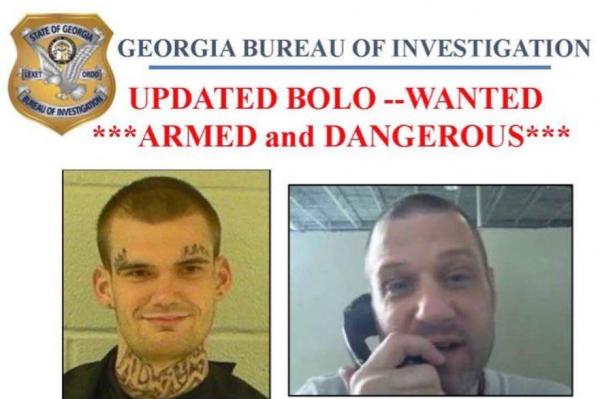 June 15 (UPI) — A pair of escaped inmates from a Georgia prison accused of killing two guards have been captured in Tennessee, authorities said late Thursday.

Authorities had been engaged in a massive manhunt for the fugitives, who escaped Tuesday during a prison transport.

It wasn’t immediately clear exactly where in Tennessee Dubose and Rowe were found, or whether they were traveling together. A reward of $130,000 had been offered for information leading to their re-arrests.

The inmates were among a group of 33 from Baldwin State Prison that was being driven in a van Tuesday by two officers. They were supposed to be separated by a metal gate in the vehicle, but Rowe and Dubose were able to get inside the cab. Once inside, they overpowered the officers, wrested away a gun and shot both men dead, police said. Investigators said the incident was captured on video.

Immediately after killing the officers, officials said the men carjacked a vehicle and sped away. The other 31 inmates were left handcuffed inside the transport with the engine running.

Since Tuesday, law enforcement officials said they’d tracked Dubose and Rowe to a rural home, which they broke into while the owners were away. Inside, they shed their prison clothes for street clothes and stole food and a white Ford pickup. They were also seen entering a Family Dollar store on Tuesday near the ransacked home.

Dubose, 24, had been serving a 20-year sentence for armed robbery and assault. Officials said he’s a member of the Aryan prison gang known as the Ghostface Gangsters.

Rowe, 43, was serving a life sentence for armed robbery and a weapons possession in 2001.