Nov. 21 (UPI) — The House Committee on Ethics opened an investigation into Rep. John Conyers, D-Mich., on Tuesday into allegations he sexually harassed a former staff member.

Conyers denied the accusations in response to an article by Buzzfeed in which a former staffer said the longest-serving member of the House fired her because she would not “succumb to [his] sexual advances.” She filed a wrongful dismissal complaint in 2014 with Congress’s Office of Compliance, which was settled for more than $27,000.

The former employee said she felt forced to accept the settlement.

“I was basically blackballed. There was nowhere I could go,” she said.

The complaint, obtained by Buzzfeed, included four affidavits in which other former staff members also accused Conyers of inappropriate sexual advances and of using congressional resources for travel for women they believed he was having affairs with.

Conyers issued a statement acknowledging the settlement but denying any wrongdoing.

“I have long been and continue to be a fierce advocate for equality in the workplace and I fully support the rights of employees who believe they have been harassed or discriminated against to assert claims against their employers. That said, it is important to recognize that the mere making of an allegation does not mean it is true,” Conyers said.

“My office resolved the allegations — with an express denial of liability — in order to save all involved from the rigors of protracted litigation.”

“The committee is aware of public allegations that Representative John Conyers, Jr. may have engaged in sexual harassment of members of his staff, discriminated against certain staff on the basis of age used official resources for impermissible personal purposes,” the release said.

Democratic leaders in the House showed support for an ethics investigation earlier in the day.

“The allegations against Ranking Member Conyers are extremely serious and deeply troubling. Obviously, these allegations must be investigated promptly by the Ethics Committee,” Rep. Jerry Nadler, D-N.Y., said.

House Democratic leader Nancy Pelosi of California said there should be “a climate of dignity and respect” in the House, “with zero tolerance for harassment, discrimination, bullying or abuse.”

Conyers said he would cooperate with an investigation.

The report about Conyers’ alleged sexual harassment comes less than a week after Sen. Al Franken, D-Minn., apologized for misconduct after sports broadcaster Leeann Tweeden said the former comedian kissed and groped her without permission.

Rep. Kihuen will not seek re-election after sexual harassment allegations 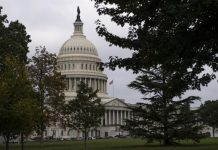