WASHINGTON, March 17 (UPI) — Hazmat crews responded to the National Zoo on Thursday after a worker caused a chemical explosion, though no injuries were reported.

The incident happened around 11 a.m. when a worker in a utility building in the American Trail section of the National Zoo in Washington, D.C., said he smelled chlorine. The worker left the building and moments later heard a “boom.”

Fire alarms sounded, though no flames were produced. D.C. metro police and fire responded to the scene with a Hazmat team. They gave an all-clear around 1:30 p.m., but the American Trail portion of the zoo remained closed Thursday. A fire department spokesman said the cause of the blast remains under investigation.

The American Trail section of the National Zoo opened following a $42 million renovation completed in 2012. 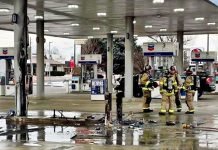