HONOLULU, Oct. 2 (UPI) — An undisclosed number of F-22 Raptors of the Hawaii Air National Guard and the U.S. Air Force have been deployed to the Middle East for as long as six months.

The Hawaii Air National Guard, or HIANG, said the deployment of most of the fighters and more than 200 personnel from Joint Base Pearl Harbor-Hickam in Honolulu took place Sept. 26 but was kept secret for security considerations.

The aircraft and personnel are now in an unidentified location in the region, which is in the area of responsibility of the U.S. Central Command.

“Because of security considerations and host nation sensitivities, the HIANG will not release the base nor country where the Raptors are operating from, nor will the HIANG release the number of F-22 fighters that are deployed,” it said. 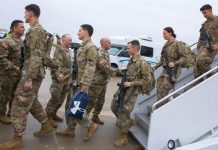