March 27 (UPI) — Army Staff Sgt. Travis Atkins gave his life June 1, 2007, to save the lives of three of his fellow soldiers while deployed to Iraq, and for his sacrifice, he will posthumously receive the Medal of Honor on Wednesday.

His 22-year-old son, Travis Oliver, and parents, John and Elaine Atkins, will receive the nation’s highest medal of honor on his behalf during a ceremony at the White House.

“He was a great soldier and a great father,” said Oliver.

Atkins, 31, was killed in combat over a decade ago while performing a routine clearance of Abu Samak, a town southwest of Baghdad, when two suspicious men were noticed trying to cross the road Atkins and his men were securing, according to a press release.

Atkins, knowledgeable of reports of insurgents in the area, yelled from his Humvee at the suspicion men, who began to act erratically.

With the vehicle now pulled over, Atkins attempted to search one of the men, who resisted, and the two began to fight.

During the altercation, Atkins became aware that the man had a bomb strapped to his body and was attempting to detonate it.

“Without pausing, Atkins bear-hugged the man from behind, threw him to the ground and pinned him there, shielding his fellow soldiers who were only a few feet away,” it said.

He died from the ensuing blast, but his actions saved the lives of his teammates.

“He saved my life and the life of several others,” said former Army Sgt. Sand Aijo who was with Atkins that day. “I would not be here today without him.”

For his deed, Atkins was initially awarded the Distinguished Service Cross in 2008 but was upgraded to the Medal of Honor following a Department of Defense review that began in 2016 of combat awards given out following Sept. 11, 2001.

Oliver said the award means a lot to him and that his father “truly” deserves it. 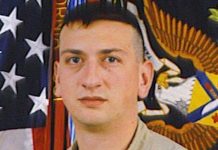 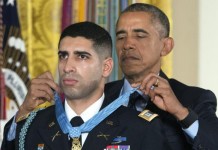