Aug. 2 (UPI) — The family of an Iowa college student, who’s still missing after more than two weeks, offered a reward of $172,000 Thursday for the woman’s safe return.

Mollie Tibbetts, 20, was last seen July 18 as she went for a run. Boyfriend Dalton Jack, for whom she was house sitting the night she disappeared, is cooperating with investigators and has been ruled out as a suspect.

The reward was announced by Tibbetts’ mother, Laura Calderwood, during a news conference Thursday.

“We believe Mollie is still alive and if someone has abducted her we are pleading with you to please release her,” Calderwood said, promising the abductor anonymity. “It is our greatest hope that if someone has her that they would just release her and claim that money that we have raised for her freedom.”

Father Rob Tibbetts said investigators have told them little about the investigation, which he called sophisticated and widespread. He said the family hopes the reward will inspire someone reluctant to come forward with information to do so.

“This is a fight for our daughter,” he said. “This is going to be solved by someone coming forward with information, either information that they think is trivial and not worth sharing or information they think might implicate a loved one or a friend. Come forward, share that information with authorities and let’s bring Millie home.” 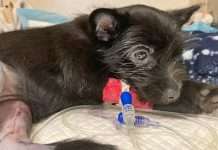