EVANSVILLE, Ind., June 5 (UPI) — More than $3 billion of the $19.1 billion disaster aid bill awaiting President Donald Trump’s signature is earmarked for American farms — but it is unclear which farmers will be eligible for the money.

The Senate bill, which passed through the House on Monday evening, instructs the U.S. Department of Agriculture to divide the aid money between the flooded Midwest, the fire ravaged West Coast, and hurricane damaged Gulf Coast and Puerto Rico.

“The USDA will have to come up with what that looks like and how many producers qualify,” said Jordan Dux, the director of national affairs at the Nebraska Farm Bureau. “This isn’t by any means a blank check to producers.”

Broadly speaking, the bill will cover farmers who lost stored grain to floods, those who were unable to plant and those whose fields and fences were severely damaged by weather.

Across much of Nebraska and parts of Iowa and South Dakota, historic flooding this spring tore through thousands of acres of soy, corn and wheat fields and left them covered in sand. Farmers must remove that sand and debris, and then level the field before normal planting can resume.

“Cleaning up fields is an ongoing problem,” Dux said. “In some cases, it could be years before the fields are ready. We have some fields with 4 to 5 feet of sand on them.”

Many of the flood damaged farms in Iowa had only just recovered from the last major flooding event in 2011, said Michael Dolch, the director of public affairs for the Iowa Soybean Association.

“Those farmers were just starting to feel good about their crop,” Dolch said. “It takes a long time to remove the deposits of sand and replace the nutrients that were lost. And now, this flood is affecting a lot of the same people.”

Those losses are particularly devastating, Dux said, because that money is a farm’s entire annual budget. The money farmers get from selling stored grain pays all their operating costs — new seed, equipment repairs and maintenance — as well as the farmer’s personal income.

Money also is to be provided for farmers who lost their peach and blueberry crops to poor weather in Georgia in 2017.

“This disaster relief bill will provide disaster relief to farms all across the country that have endured incredibly destructive weather events,” said RJ Karney, the American Farm Bureau Federation’s congressional relations director. It will allow farmers “to turn the page and move forward.” 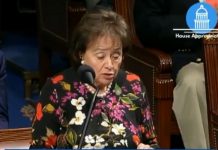