BRUSSELS, Sept. 7 (UPI) — European farmers gathered in protest outside of the European Union Council building in Brussels where they threw eggs, sprayed hay and shot milk at riot police.

The protesters were demanding the EU intervene in decreasing prices for their products after the recent fall in demand for produce due to the Russian embargo on western trade and a fall in demand from China.

The fierce protest forced Brussels police to close the entry into the EU building.

Farmers were calling for an end to taxes on their products and an end to bureaucracy they believe undermines competitiveness. The protest in Belgium follows similar protests in Europe.

On Thursday, more than 1,300 farm tractors in six convoys descended on Paris.

In Brussels, the ferocity of the protesters was unleashed onto police. Barrels of hay were lit ablaze, a combine harvester was used to spray hay on police, a cannon was used to shoot milk and dozens of eggs were thrown.

Protest organizers said about 6,000 farmers demonstrated and 2,000 tractors were used to block traffic in and around Brussels. 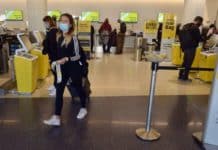