The incurable disease, called chronic wasting disease, has been found in 25 states — mostly in the Rocky Mountain and Midwestern regions. Though it’s spread as far east as New York, south into Texas and north into Canada.

“States are all in various stages of infection,” said Lou Cornicelli, a wildlife researcher and policy manager at the Minnesota Division of Fish and Wildlife. “We try to contain it, but it is tough to categorize if you’re being successful. Mostly it’s just trying to limit the spread.”

The inability of wildlife agencies to halt the disease spread has scientists concerned. One of their biggest fears is that — like mad cow — it might become infectious to humans.

There has been no confirmed instance of that happening, but there is some evidence to suggest it could. In 2017, Canadian researchers successfully infected macaque monkeys with chronic wasting disease by feeding them the meat of infected deer. Macaques are the closest animal genetically to humans.

“We always assumed there was a species barrier,” said Dave Clausen, a retired Wisconsin veterinarian and hunter who follows the disease. “Now, it seems that barrier may be more porous than we thought.”

But even if the disease never becomes a threat to humans, there is other cause for concern.

Deer, elk, moose and other cervids are all susceptible to the disease, and they serve an important role in North American ecosystems. And deer and elk hunting is big business in some states. In Wisconsin, for example, deer hunting generates nearly $1.4 billion annually for the state economy, according to the Wisconsin Department of Natural Resources.

“Our concern is what the long-term effect will be on deer population down the road,” Cornicelli said.

Scientists are seeing major impacts in states like Colorado, where the disease has been present for several decades. One large herd there has been cut nearly in half. Across the state last year, up to 16 percent of animals tested had the disease, according to the Denver Post.

But just how many more deer will be lost is unclear, partly because so little is known about the disease.

It was first discovered in a captive deer in Colorado in the late 1960s. It was more than decade before it to appear in a wild animal in that same state. Thus the spread began.

Scientists think it is spread through contact with the bodily fluids of infected animals.

Animals that get the disease become extremely thin and disorientated. They stumble around, foaming at the mouth. They sometimes have insatiable thirst, constantly urinate and lose their fear of humans.

This all happens because the disease basically eats away the animal’s brain, leaving it looking like a sponge with lots of holes. Scientists believe this is caused by something called a prion.

“Prions are unique,” Clausen said. “They’re a protein that causes other proteins in the body to misfold and not behave in a normal manner.”

Scientists don’t know how or why this happens. Most of the affected proteins are in the brain, though.

Prions are the same agents that cause Bovine Spongiform Encephalopathy (mad cow disease), and scrapie, which affects sheep and goats. There are prion diseases that can infect humans, as well. They all work basically the same way, by destroying the animal’s brain.

Unlike other disease-causing agents like bacteria or viruses, which are living things, a prion is a protein. It’s not alive. So, it can’t be killed. And there is no cure.

“We haven’t found a way to deactivate it,” Clausen said.

So, the only way to stop it spreading is to kill off all the infected animals, Cornicelli said.

Multiple states are attempting to do this, in varying degrees. In Minnesota, where Cornicelli works, the state is culling hundreds of deer in areas where the disease was discovered through special hunts this winter. Illinois is also holding a special deer season in its infected zones. Wisconsin is handing out more hunting permits where deer have tested positive.

“We’ve been really aggressive,” Cornicelli said. “But we still don’t know what the next five years will bring.” 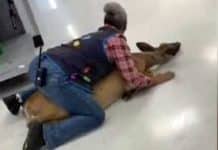 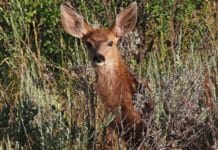