SEATTLE, Sept. 29 (UPI) — The father of a high school student who took a gun to campus and killed four classmates and himself in Washington state last fall was convicted Tuesday on gun-related charges.

Raymond Lee Fryberg, Jr., was convicted by jurors on six counts of illegally possessing firearms in violation of a domestic violence protection order. One of the firearms, a Beretta, was used in the shooting at Marysville-Pilchuk High School on Oct. 24, 2014.

Tuesday’s conviction marks the first time a person other than the gunman was held criminally responsible in connection to a school shooting plot.

Fryberg was given a protective order years ago after supposedly assaulted his then-partner, NBC News reported. As part of the order, he was barred from possessing firearms.

Defense attorneys said Fryberg wasn’t aware of the protective order and didn’t know he couldn’t have guns. Prosecutors, though, argued that he was indeed aware of the order — because he had openly admitted to violating it in court three years ago.

Fryberg indicated on the gun purchase disclosure form that there were no restrictions preventing him from owning a firearm, the NBC News report said.

Defense attorneys called no witnesses and Fryberg did not himself testify during the three-day trial in U.S. District Court in Seattle on six counts of gun charges.

Fryberg’s son, Jaylen, took the gun to school last fall and shot four of his friends before turning the gun on himself inside the cafeteria, officials said. 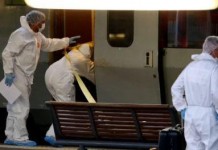