Nov. 17 (UPI) — Killings classified as hate crimes skyrocketed by more than 100% to a record high last year, as all forms of hate crime continue to rise throughout the country, according to data released Monday by the FBI.

The FBI data shows there were 51 murders last year that were reported as hate crimes, up 113% percent from the 24 in 2018 and the most since the bureau started compiling such data after Congress passed the Hate Crimes Statistics Act in 1990.

Last year was also the fourth consecutive increase in hate crime murders, according to the FBI data.

In total, there were 7,314 reported hate crime incidents in 2019, an increase of some 200 such incidents from 2018. Last year also represented the fifth increase in six years.

A hate crime is defined as a criminal offense that is motivated by the offender’s bias against a race, religion, disability, sexual orientation, ethnicity, gender or gender identity. Some crimes are motivated by more than one bias, the FBI said.

“When one individual is targeted by a hate crime, it hurts the whole community — that’s why people are feeling vulnerable and afraid,” Anti-Defamation League CEO Jonathan Greenblatt said in a statement on the statistics’ release.

The Southern Poverty Law Center, a non-profit civil rights legal advocacy organization, said in a statement that the increases in hate crimes reflect “a growing threat of violence from the extreme right.”

Of the 51 hate crime murders committed last year, some two dozen were attributed to attacks that were planned to incite further violence, such as the El Paso Walmart shooting that killed 23 people, the center said.

“These racist ideas are not a political anomaly but rather the most extreme outgrowth of a White supremacist political culture,” the center said. “That racism, anti-Hispanic sentiment, antisemitism and homophobia remain pressing problems in the U.S. is reflected in the 2019 hate crime increases.”

The data also shows surging hate crime incidents despite the 15,588 law enforcement agencies that voluntarily submitted their data represent a significant drop from the 16,039 agencies that participated in 2018 and the 16,149 in 2017.

The New York-based ADL, a Jewish non-profit organization that fights all forms of hate, described the FBI’s annual report as providing “the most comprehensive snapshot” of bias-motivated crimes but the lack of agencies reporting under tabulates the true number of such crimes being committed.

“The total severity of the impact and damage caused by hate crimes cannot be fully measured without complete participation in the FBI’s data collection process,” Greenblatt said, calling on Congress and law enforcement agencies to improve data collection and reporting of hate crimes.

Greenblatt said 2019’s increase may be the product of improved reporting but that local law enforcement agencies across the country still need to improve training in order to remove barriers that prevent victims of hate crimes from coming forward.

“In this pivotal moment in our national conversation about the importance of justice for communities of color, religious minorities and the LGBTQ+ community, we must make combating hate crimes a top priority,” he said.

The Southern Poverty Law Center mirrored this call, urging the Biden administration to mandate the federal collection of hate crime data and move funding to the Department of Education aimed at preventing extremism and to build a curriculum on structural racism. 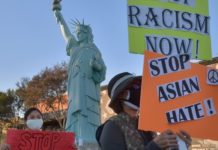