March 21 (UPI) — Finland maintained its No. 1 spot for the second year in a row in the United Nations’ World Happiness Report released Wednesday.

Northern Europeans held onto most of the top positions in the report, with Denmark, Norway, Iceland, Netherlands, Switzerland, Sweden, New Zealand, Canada and Austria rounding out the Top 10. Norway, Denmark and Switzerland have each held the top spot in recent years.

The report, released on the United Nations World Happiness Day, evaluated 156 countries and those at the top were found to have high values in six categories of well-being — income, healthy life expectancy, social support, freedom, trust and generosity.

The United States fell from 14th in 2017 and 18th in 2018 to 19th in 2019. Professor Jeffrey Sachs, director of the Sustainable Development Solutions Network — which helped produced the report — blames that in part on growing addiction in the country.

“This year’s report provides sobering evidence of how addictions are causing considerable unhappiness and depression in the U.S.,” he said. “Addictions come in many forms, from substance abuse to gambling to digital media. The compulsive pursuit of substance abuse and addictive behaviors is causing severe unhappiness. Government, business, and communities should use these indicators to set new policies aimed at overcoming these sources of unhappiness.”

The United States wasn’t the only world super power not to hit the Top 10. Britain was 15th, Germany was 17th, Japan was 58h, Russia was 68th and China was 93rd. 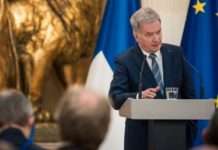