VALENCIA, Venezuela, Sept. 1 (UPI) — A fire killed at least 17 people in Venezuela’s Carabobo Judicial Prison, also known as the Tocuyito jail, near the city of Valencia on Monday.

An investigation has been launched into the cause of the blaze, with preliminary reports indicating it was caused by a short circuit. Nine men and eight women died after the fire spread through Hall 1 of Tocuyito.

Security was increased within the prison and a perimeter of reinforced surveillance was set up to prevent a mass prison escape. The bodies were being identified in the morgue of the Dr. Enrique Tejera Hospital in Valencia, which was guarded by security personnel from Venezuela’s Bolivarian National Guard.

The male victims were inmates of the prison while the females were visitors who were spending the night with their imprisoned partners, which is not unusual, according to victim relatives who gathered outside of the morgue.

Venezuela has one of the highest crime and homicide rates in Latin America. The South American country has the world’s fastest rate of annual inflation and faces shortages of basic goods amid a deteriorating economic climate that exacerbates security problems.

Venezuela’s prisons are notoriously overcrowded as the judicial system attempts to deal with the increase of crime. Many of those incarcerated in the country are awaiting trial. 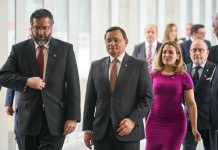