Aug. 30 (UPI) — Researchers have developed the first fully 3D-printed “bionic eye,” a device that someday could help blind people see or improve vision for others.

An array of light receptors were printed on a hemispherical surface for the first time, report researchers at the University of Minnesota in findings published Tuesday in the journal Advanced Materials.

“Bionic eyes are usually thought of as science fiction, but now we are closer than ever using a multimaterial 3D printer,” study author Dr. Michael McAlpine, an associate professor of mechanical engineering at Minnesota, said in a press release.

McAlpine, who holds the patent for 3D-printing semiconducting devices, said they were surprised they achieved a 25.3 percent efficiency in converting the light into electricity with the fully 3D-printed semiconductors. It is comparable to that of microfabricated counterparts — a surface that is not as flexible in design and manufacturing.

“We have a long way to go to routinely print active electronics reliably, but our 3D-printed semiconductors are now starting to show that they could potentially rival the efficiency of semiconducting devices fabricated in microfabrication facilities,” McAlpine said. “Plus, we can easily print a semiconducting device on a curved surface, and they can’t.”

To overcome challenges of curved surfaces, the researchers first started with a hemispherical glass dome. A base ink of silver particles was employed, as well as their custom-built 3D printer.

Instead of running down the curved surface, the dispensed ink stayed in place and dried uniformly, researchers reported. Then, they used semiconducting polymer materials to print photodiodes, which convert light into electricity.

The complete process took about one hour, they said.

A few years ago McAlpine and his colleagues printed a “bionic ear.” Later successes were 3D-printed artificial organs for surgical practice, electronic fabric as “bionic skin,” electronics on a moving hand and devices for people with spinal cord injuries.

McAlpine has personal gratification with the bionic eye, and notes that the next step in development is to print a soft hemispherical material to implant into a real eye. Additionally, the researchers want to add more light receptors to improve efficiency.

“My mother is blind in one eye, and whenever I talk about my work, she says, ‘When are you going to print me a bionic eye?'” McAlpine said. 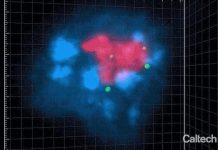 Nucleus of the cell mapped in 3D 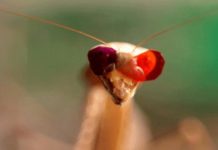 Praying mantises have a unique way of seeing in 3D 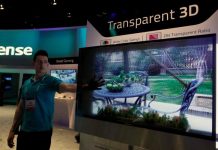