Jan. 15 (UPI) — A casino boat in Florida caught fire Sunday with 50 passengers on board, resulting in more than a dozen injuries, officials said.

“The Sun Cruz casino shuttle caught on fire with 50 people on board. All passengers were able to make it to shore where EMS treated them,” the Pasco Sheriff’s Office said in a statement.

The casino boat was headed toward international waters after it embarked from port in Pasco County, just north of Tampa. But at around 4 p.m. EST on Sunday, the boat caught fire. The boat was close enough to shore that several passengers were able to wade back, the Tampa Bay Times reported.

But between 12 and 15 people had to be rescued from the water, WTSP-TV reported.

Witness Bakr Jandali, 19, told the Tampa Bay Times that he saw clouds of smoke rising from the boat and passengers jumping into the cold waters.

“They didn’t have much time to decide whether or not to jump,” Jandali said. “The fire was moving fast. It was a hard jump.”

He added: “All of us, my family and the neighbors, brought them towels and water. They were so cold.” 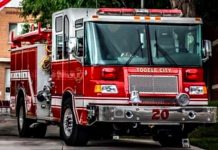