Since the Fourth of July holiday, Florida reported 10,059 new coronavirus cases, raising its total to 200,111 — the third-highest total in the country.

Appearing on ABC News’ This Week, Miami Mayor Francis Suarez attributed the increased spread of the virus in the state to the decision to reopen bars and restaurants.

“There’s no doubt that the fact that when reopened, people started socializing as if the virus didn’t exist,” said Suarez.

He also likened the city’s decision to make wearing face coverings in public mandatory to wearing a seatbelt while driving, saying “there’s a very good chance that we’re going to be able to slow down or stop the spread” if people comply.

The United States has reported a total of 2,841,124 positive COVID-19 cases and 129,689 deaths, according to figures by John’s Hopkins University.

As cases surge, Food and Drug Administration Commissioner Dr. Stephen Hahn asked about comments by President Donald Trump over the weekend in which he stated that “99 percent” of coronavirus cases are “totally harmless.”

“What I’d say is, you know, any case, we don’t want to have in this country. This is a very rapidly moving epidemic. A rapidly moving pandemic. And any death, any case, is tragic. And we want to do everything we can to prevent that,” Hahn told ABC News, while encouraging Americans to follow Centers for Disease Control guidelines on preventing the spread of the virus.

Hahn told CNN’s State of the Union that it was “too early” to tell whether it would be safe to hold the Republican National Convention in Florida amid the surge in cases.

Republican National Committee spokesman Mike Reed told CNN the party remains committed to holding the convention in Jacksonville, Fla., after moving events including Trump’s acceptance speech from North Carolina due to coronavirus restrictions, saying they will conduct temperature checks and have COVID-19 tests available for attendees.

“The event is still almost two months away and we are planning to offer precautions including but not limited to temperature checks, available PPE, aggressive sanitizing protocols and available COVID-19 testing,” said Reed. “We have a great working relationship with local leadership in Jacksonville and the state of Florida and we will continue to coordinate with them in the months ahead.”

“We were originally preempted from doing that but I’m thankful the governor did allow cities to put masking orders in place, which will help,” she said.

Gallego added the state has also had difficulty providing testing and has requested that the Federal Emergency Management Agency conduct community-based testing in Phoenix.

“It’s really, really difficult. I’ve been spending time begging everyone from Walgreens to openup testing, out of state testing companies to come in because it’s awful to see people waiting in a car, while you’re feeling sick, people were running out of gas and this is as many months in,” she said.

New York, which still holds the highest totals for cases and deaths in the country, reported 533 new cases on July 4th for a total of 397,131 positive cases and a death toll of 24,904.

Gov. Andrew Cuomo on Sunday morning announced that New York City would enter the third phase of its reopening plan on Monday but would not allow restaurants to offer indoor dining.

“New York City is a crowded, dense urban area and — until recently — was the global epicenter of the COVID-19 crisis,” said Cuomo. “Out of an abundance of caution and after seeing other states’ experiences with indoor dining, we will wait to reopen it as the city moves to Phase Three tomorrow.” 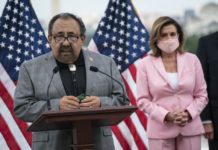