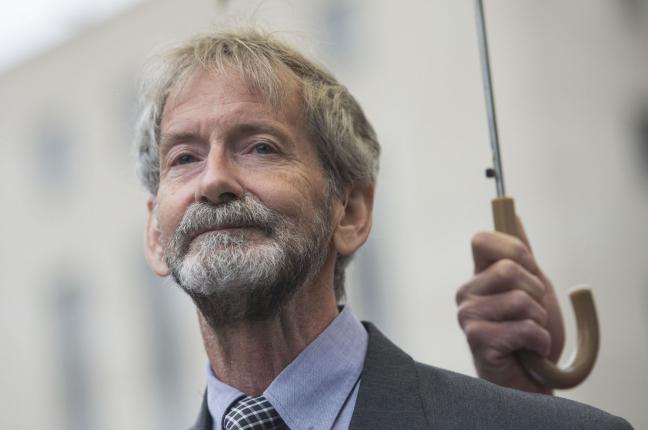 WASHINGTON, May 21 (UPI) — Doug Hughes, the Florida mail carrier who landed his gyrocopter on the U.S. Capitol’s West Lawn last month, appeared in court on Thursday to plead not guilty to all six federal charges against him.
Among the charges against Hughes are two felonies: operating an aircraft without a license and flying an unregistered aircraft. He faces up to nine and half years in prison.

“As long as I’m free I’m going to introducing voters to groups with solutions to problems of corruption that the vast majority of voters recognize and oppose.” Hughes said after the hearing.

On April 15, tax day, Hughes piloted the low-altitude aircraft from Gettysburg, Pa., to Washington, landing on the Capitol lawn.

Hughes carried 535 two-page letters, one for every member of Congress, highlighting the need for campaign finance reform because of what he sees as the corrosive effect of money politics. He described his actions as an act of civil disobedience.

“I’ll never do anything like this again, but I would do it exactly the way I did,” Hughes said.

Capitol Police arrested Hughes after he landed the small aircraft. He was later released on bail and remained under house arrest in Ruskin, Fla., where he wore an ankle monitor.

Mag. Judge Alan Gray allowed Hughes to move within Hillsborough Count,y where he lives, though he still must wear the monitor.

The judge also refused to let Hughes visit the Capitol, White House and other areas in Washington, which he was banned from doing immediately after the incident.

Hughes was also put on administrative leave from his job at the U.S. Postal Service.

The postal worker’s protest has raised concerns from lawmakers about the security of the Capitol. Hughes flew across 30 miles of some of the nation’s most restricted airspace on his route to D.C.

The Tampa Bay Times wrote about Hughes’s protest plans before the flight. He also informed the Secret Service and other news organizations by email and live-streamed the event on The Democracy Club, a website dedicated to congressional reform.

Hughes has stated his frustration at the focus on the security concerns raised, rather than the reasons for his flight:

“I have faith in a jury of my peers and will accept whatever consequence I must,” Hughes wrote in an op-ed in The Washington Post. “I simply hope by putting my freedom on the line, others might realize how precious their freedom is and join those of engaged in this fight to preserve and protect our government of, by and for the people.”
Members of CODEPINK, the women-led grassroots activist group, presented Hughes with a framed stamp after the hearing.