The two companies will equally own the new venture — called Zotye Ford Automobile Co. Ltd. — which is subject to regulatory approval in both nations, Ford said in a statement.

Zotye Ford plans to build a factory in Zhejiang Province, south of Shanghai, which will include a product research and development center and a sales and services network, Ford said.

By 2025, the U.S. automaker said it envisions 70 percent of all its vehicles sold in China will have electric powertrain options. Ford already has joint ventures in China with Chongqing Changan Automobile and Jiangling Motors.

Zotye Auto, which is No. 1 in China’s electric small vehicle segment, has sold more than 22,500 all-electric vehicles through September — 14 percent more over last year.

Zotye’s electric cars include the the two-seat E200.

Fleet said he plans to meet with President Donald Trump and China’s Xi Jinping on Thursday.

Ford is planning $10 billion in exports from the United States to China in the next three years, including Ford-brand and Lincoln-brand cars and components. 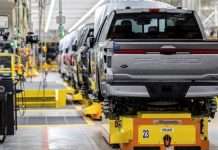