Aug. 10 (UPI) — A judge sentenced a former Baltimore police officer to nine months in prison after he was caught on video assaulting a suspect in 2018.

Arthur Williams received the prison time after Baltimore City Circuit Court Judge Yolanda Tanner convicted him of misconduct in June. On another charge — second-degree assault — he received a five-year suspended sentence and two years of probation.

“I believe, based on the evidence submitted, this was more than just a mistake, more than a misunderstanding,” Tanner said.

The Baltimore Police Department suspended Williams from the force for the assault before he resigned. Williams said he repeatedly punched and kneed McGrier in the head out of self-defense.

McGrier praised the prosecution for helping to “bring justice.”

“I’m relieved to put it behind me, start my healing process, get back to my normal life, try to,” he said after the sentencing. 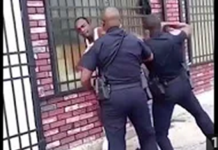