Dec. 28 (UPI) — A court in Bosnia sentenced a former female fighter known as the “mistress of life and death” to 14 years in prison for war crimes on Wednesday.

Azra Basic was handed the sentence after being found guilty of taking part in the killings, torture and inhumane treatment of Serb civilians and prisoners of war during the Balkan war in 1992.

The court determined Basic murdered a restrained prisoner named Blagoja Djuras at the Yugoslav People’s Army Hall in Derventa, by stabbing him in the neck.

It was also found she ordered prisoners to remove their shoes and clothing, eat money, walk barefoot on glass and lick blood off Djuras’s dead body.

The sentence handed to the 58-year-old Basic is the most severe given to a woman for atrocities committed during the Bosnian conflict.

During the sentencing the court considered the brutal nature of her crimes as well as the fact she didn’t have any prior convictions.

Basic lived in the U.S. state of Kentucky for 20 years, where she became a naturalized citizen after the war.

She was then arrested in 2011 and prosecuted for immigration fraud before being extradited to Sarajevo from the United States in November 2016 to stand trial for her crimes in the Bosnian conflict.

At least 100,000 people died during the fighting that lasted about four years, until a peace deal brokered by the United States brought it to an end. 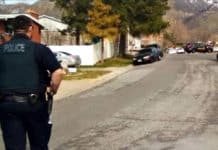