Current President Alberto Fernandez confirmed in a statement that Menem died at a clinic in Buenos Aires following complications from a urinary tract infection.

Menem took office in July 1989 with the goal of reforming Argentina’s economy after his predecessor, Raul Alfonsin, resigned due to a final crisis brought on by hyperinflation.

As president, he privatized state companies, curtailed the influence of labor unions, slashed state subsidies, fired thousands of government employees as well as tying the Argentine peso to the U.S. dollar on a 1-to-1 basis in 1991.

His financial policies helped drop inflation to low single digits, while the economy grew by 6.1% annually from 1991 to 1997 but unemployment rose under his leadership.

The early years of Menem’s presidency were also marked by his decision to issue a blanket amnesty to the leaders of the military that staged multiple rebellions against Alfonsin, who called it “the saddest day in Argentine history.”

In 1993, Menem reached a deal with the opposition Radical Civic Union party to change the Constitution to allow presidents to run for an additional term and won re-election in 1995 but lost a bid to amend the constitution to allow yet another term in 1999.

Two years after he left office, Argentina defaulted on its $155 billion in public debt, the largest default by any nation in history at the time.

Despite analysts blaming him for the economic failure that drove the poverty rate up to 58%, Menem ran for president again in 2003 and garnered the highest percentage of votes during the first round of elections but dropped out ahead of a runoff.

He remained active in politics for the remainder of his life, serving as a senator with the Justicialist Party from 2005 to 2019 before being re-elected for another term that was set to end in 2023 as a member of a Peronist coalition. 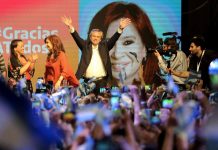 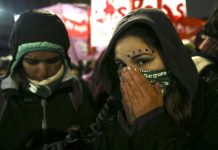