The former congressman said that when he told his son that the company’s clinical trial failed, he was intending for the younger Collins to avoid stock losses. Prosecutors said the three men collectively avoided losing $768,000.

“When I did these things, I knew they were illegal and improper,” Chris Collins said. “I’m sorry for the pain I have caused.

“I don’t think ‘regret’ is the proper word for it. I let them down.”

He apologized to his son, Zarsky and his constituents in New York’s 27th Congressional District, which comprises rural Buffalo and Rochester.

Chris Collins faces up to four years in prison during his sentencing in January.

Cameron Collins and Zarsky also were indicted in the scheme and both were expected to plead guilty to charges Thursday.

Police arrested Chris Collins in August 2018 on the insider trading charges, to which he immediately pleaded not guilty. He initially suspended his re-election bid but stayed on the ballot and secured his seat for a fourth term.

He maintained his innocence in the case until Monday, when he resigned his seat in Congress.

Chris Collins was the first member of Congress to publicly endorse Donald Trump in his presidential election in February 2016. 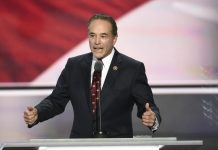 Chris Collins sentenced to 26 months in prison for insider trading