Jan. 12 (UPI) — Former Senate Democratic leader Harry Reid lied in state at the U.S. Capitol Rotunda on Wednesday as House and Senate members attended a short program in his honor.

Senate Majority Leader Chuck Schumer said while many considered Reid to be soft-spoken, “his words carried the force of thunder.” Reid served in Schumer’s current position through most of the presidency of Barack Obama, capping a 30-year stint as Nevada’s longest-serving senator.

Brought up from humble beginnings in Searchlight, Nev., Schumer, D-N.Y., described an incident where Reid pulled him into a small bathroom and gave him money to purchase new shoes. Schumer said when he asked years later why he did that incident in private, Reid told him that he didn’t want to embarrass him in front of his wife.

House Speaker Nancy Pelosi, D-Calif., said she was probably on the end of Reid’s well-publicized “hang up” phone calls the most while he served as Senate majority leader and Pelosi during her first turn as house speaker.

She said Reid would repeatedly reject praise for his good work, honor Pelosi said he deserved.

President Joe Biden, who spoke at Reid’s Las Vegas funeral on Saturday did not speak on Wednesday morning but was expected to make comments Wednesday afternoon. Vice President Kamala Harris did attend the event.

He died Dec. 28 at age 82 after fighting pancreatic cancer. His funeral included tributes by Obama as well as Biden. 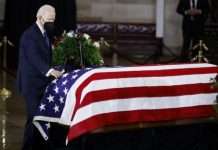