Jan. 7 (UPI) — Fotis Dulos, 52, the estranged husband of Jennifer Farber Dulos, a Connecticut mom presumed dead after being missing for more than seven months, was arrested Tuesday and charged with murder, felony murder and kidnapping.

Dulos will be arraigned Wednesday, according to his attorney, Norm Pattis.

Police later found her vehicle. They still haven’t found her body, but they found blood stains on the garage floor and on a vehicle located in the garage, according to an arrest warrant, which led police to believe the home was the crime scene and there was evidence of attempts to clean it up.

Dulos was in a two-year custody battle with the New Canaan mother of five when she was last seen on May 24 after dropping her children off at school. Dulos was charged the next month with hindering the prosecution and tampering with evidence, along with his girlfriend, Troconis.

Dulos and Troconis pleaded not guilty to the charges.

In September, Dulos was charged on a second count of tampering with evidence, which he also pleaded not guilty to.

Original charges were based on surveillance videos appearing to show Dulos making multiple stops on a 4-mile stretch of Albany Avenue in Hartford as he tossed out garbage bags later found to contain Farber Dulos’ blood. A woman resembling Troconis was with him at the time, according to police. 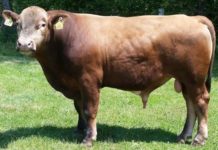 Aggressive beefalo on the loose in Connecticut