Oct. 7 (UPI) — Police in Kansas City, Kan., are searching for two suspects after four men were killed and five others injured in a shooting at a bar early Sunday.

The gunmen entered Tequila KC bar, a private club, around 1:30 a.m., according to police.

All four of the dead were Hispanic — one in his late 50s, one in his 30s and two in their mid 20s. Police estimate that 40 people were in the club when the shooting occurred.

“We’re trying to speak with the various witnesses that we have here trying to get stories kind of straightened out and put everything together so that we can get a good suspect description and catch these guys,” KCK police spokesman Officer Thomas Tomasic said in a report by The Kansas City Star. “We believe there were two suspects who came in and began firing.”

The five injured were transported to area hospitals. Two were released by mid-morning Sunday and the two others were in stable condition, Tomasic said.

Police were collecting evidence, including determining the number of shots fired, and surveillance video from the bar.

“Detectives are here and are looking at any surveillance,” Tomasic told KHSB-TV. “This is definitely one of those that we’re going to do everything very slowly, very methodically and correctly.”

No one was in custody.

One of the suspects may have been involved in an incident at the club earlier and returned.

“We do not believe it was random,” Tomasic said. “We do believe it was an isolated incident. We don’t feel that these suspects are going to go out and do this again.”

Tomasis said police do not believe the shooting was racially motivated.

Also responding to the scene were agents from the Bureau of Alcohol, Tobacco, Firearms and Explosives in Kansas City, Mo., according to a Twitter post by the agency. 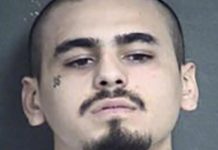