More than 2,500 people defied the government’s coronavirus restrictions and national curfew to attend the event in Brittany.

The rave started Thursday but ended Saturday, and authorities have seized trucks, sound systems and generators, and police are investigating thoroughly “so that this illegal event is harshly sanctioned,” according to French interior minister Gerald Darmanin.

About two-thirds of the fines issued were related to COVID-19 restrictions and 400 to drug offenses, police said.

Local police tried to shut the party down Thursday, but faced “violent hostility” from partygoers, who had planned to stay until Tuesday.

Police said a number of the partygoers were from Britain and Spain.

France instituted a national curfew from 8 p.m. to 6 a.m. in mid-December. 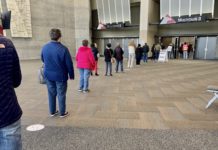 Breaking: Utahns over age 50 can sign up for COVID-19 vaccine starting Monday