Ananya, 12 years old, was declared the champion after correctly spelling “marocain,” which is a dress fabric made from silk or rayon. She defeated second-place finisher Rohan Rajeev of Edmond, Okla., in the 36th round at the Gaylord National Resort and Convention Center, just outside Washington, in Oxon Hill, Md.

In the past two years, the Bee ended in a tie.

“It’s like a dream come true, I’m so happy right now,” Ananya said upon receiving the trophy. “I just focused on my word and tried to spell it right.”

She then was told during the ESPN live broadcast her favorite team — the Golden State Warriors — defeated the Cleveland Cavaliers 113-91 in the Finals in Oracle Arena, Oakland.

“Go Curry!” she said in reference to the Warriors’ star Stephen Curry.

Her 7-year-old brother, Achuth, was seated in the stands wearing a Warriors shirt.

Ananya told reporters said she knew every word given to her, including the final one, because it was mentioned in her social studies book.

“You can find words in interesting places,” she said.

Last year she tied for 172nd place in her first appearance at the Bee. She has two more years of eligibility.

“I’m really excited and happy to see she won. She deserved it,” said her father, Vinay Sreekumar. “It’s not a surprise for me. She worked hard for it.”

They have family in India, and her grandmother traveled from the country to watch in person.

On Tuesday, the annual contest opened with a record 291 spellers. The field was narrowed to 40 finalists Wednesday after two oral rounds of spelling and a written spelling and vocabulary test. 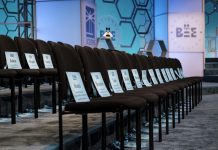