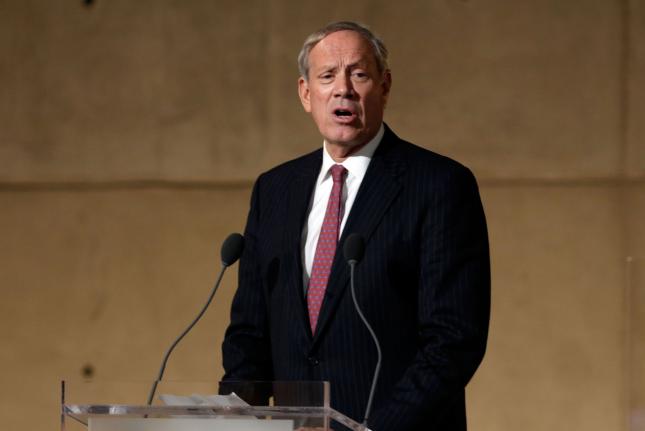 NEW YORK, May 28 (UPI) — Former New York Gov. George Pataki announced he’s joining the race for president in 2016 with a video message on his website Thursday. He joins a crowded field of candidates seeking the Republican nomination for president, including former Sen. Rick Santorum, R-Pa, who just announced his campaign Wednesday evening.

The 69-year-old Pataki was governor of New York for three consecutive terms, leading the state through the Sept. 11, 2001, terror attacks at the World Trade Center.

He touted his moderate approach and ability to lead a largely liberal state as a conservative. “America has a big decision to make about who we’re going to be and what we’re going to stand for. The system is broken. The question is no longer about what our government should do, but what we should do about our government, about our divided union, about our uncertain future,” Pataki said in the video. “We are all in this together. And let us understand that what unites us is so much more important than what might seem superficially to divide us.”

And at a live event at Penn United Technologies in Cabot, Santorum said he wants to “take back America.”

“Working families don’t need another president tied to big government or big money and today is the day we are going to begin to fight back,” Santorum said Wednesday, flanked by his wife and children. “I am proud to stand here among you and for you, the American workers, who have sacrificed so much to announce I am running for president of the United States.”

Santorum, 57, appeals primarily to social conservatives — as he did during his 2012 presidential bid — but plans to widen his message to include what he calls “blue-collar conservatism.”

A video announcing his candidacy before his speech Wednesday highlighted blue-collar workers and he spoke of his Italian grandfather traveling to the United States to work in coal mines.

Santorum said he wants the United States to become the world leader in manufacturing. He intends to do so by scrapping “the corrupt federal tax code and the IRS that goes with it.”

“It’s time to give America a simple fair flat tax” to create millions of jobs and increase take home pay, he said.

Santorum also called for an end to common core, a revamping of the VA, the defeat of the Islamic State and showed support for religious freedom laws.

A new Quinnipiac University poll found that Pataki wasn’t even rated among the top 10 favored candidates and likely candidates for the GOP nomination. In fact, there’s no clear leader among the GOP field.

“Safe to say, the 2016 Republican presidential primary is anyone’s race. With no front- runner and identical numbers for the top five contenders, it’s a horserace which can only be described as a scrambled field – at least so far,” said Tim Malloy, assistant director of the Quinnipiac University Poll.

Among potential Democratic voters, former Secretary of State Hillary Clinton had the most votes by far with 57 percent, U.S. Sen. Bernie Sanders, I-Vt., has 15 percent and Vice President Joe Biden has 9 percent.