He made his announcement hours after the Democrat running to replace him, Kevin Van Ausdal, dropped out the race, leaving Republican and QAnon supporter Marjorie Taylor Greene the lone candidate from a major party to run for Georgia’s 14th Congressional District.

Graves announced his plans not to run for re-election in December after five terms in the House of Representatives. Instead of finishing out his term, though, he said he plans to step aside in October.

“With the White House planning to wrap up the people’s business and the final report from the modernization committee set to be filed in the next few weeks, I intend to step down from Congress and begin the next chapter of life in October,” he said in a statement.

“Congress is going into a long recess and my committee work will be complete. In short, my work will be done. I’m announcing this today to avoid surprises, and it just doesn’t seem right to kill time on the taxpayer dime.”

Earlier in the day, Van Ausdal cited “personal and family reasons” for his decision to quit the race to replace Graves. He said he planned to move out of state but declined to elaborate further.

“Although all the details will remain my family’s alone, please understand this was not an easy decision,” he said. “We are real people managing hard choices.”

His departure means Greene is all but certain to win the race. She wished him well on Twitter.

“As the congresswoman from NW Georgia, I look forward to fighting for our Christian, American values and helping [President Donald Trump] pass an #AmericanFirst agenda!” she tweeted. “No one will fight harder against the radical, Socialist Democrats than me.”

Greene has drawn criticism for her support of baseless conspiracy theories put forth by QAnon, and sharing racist and xenophobic videos on social media, the Atlanta Journal Constitution said. 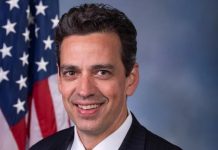