Nov. 20 (UPI) — A Georgia teenager was arrested on Tuesday after police said she was planning an attack on a predominantly black church.

“Our investigation indicated the church was targeted by the juvenile based on the racial demographics of the church members,” police chief Jay Parrish said. “The church was immediately notified of the incident by Gainesville police to ensure the safety of our community and the current threat was under control.”

The girl faces charges of criminal attempt to commit murder.

Parrish said the teen visited the church earlier this month but no one was there at the time. Police did not know how she planned to carry out the attack but noted that she collected knives.

“I do know that she did a lot of internet research on what she wanted to do,” said Parrish. “I think she wanted notoriety and in that she looked up African American churches.”

Parrish added that there are several black churches in Gainesville but “somehow it landed her on this one and that became the target.”

Administrators at Gainesville High School learned of the girl’s plot from fellow students who said she had a notebook with “detailed plans to commit murder” at the church.

School resource officers were notified of the girl’s notebook on Friday and opened an investigation before turning the case over to Gainesville police, who notified the church’s pastor and took the girl into custody.

“I have no doubt that we thwarted an attack that would’ve been ugly,” said Parrish.

Bishop Reginald T. Jackson said the church was concerned about the incident but was “not surprised,” lamenting that Georgia does not have a hate crimes law permitting more severe penalties for certain bias-related crimes.

“Hate crimes and domestic terrorism have been on the rise for many years, but it is unfortunate we cannot have this perpetrator prosecuted on hate crimes in Georgia because there is no law on the books to address it,” he said. 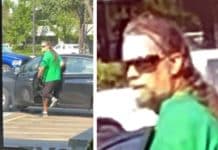