Aug. 18 (UPI) — Gibraltar on Sunday rejected a request by the United States to not release a detained Iranian oil tanker.

A Gibraltar court ruled that it could not seek an order to continue restraining the Grace 1, citing differences between sanctions placed on Iran by U.S. President Donald Trump and those authorized in the European Union.

“The EU sanctions regime against Iran — which is applicable in Gibraltar — is much narrower than that applicable in the U.S.,” Gibraltar’s government said in a statement.

On Friday, the United States unsealed a seizure warrant and forfeiture complaint against the tanker alleging that all the crude oil on the vessel and $995,000 are subject to forfeiture, alleging it attempted to “access the U.S. financial system to support illicit shipments to Syria from Iran,” in violation of the International Emergency Economic Powers Act.

Iran is also accused of bank fraud, money laundering and terrorism due to Iran’s oil industry’s involvement in the Islamic Revolutionary Guard Corps, which is designated a terrorist organization in the United States, but not in Gibraltar, Britain or the EU generally.

The British originally seized the ship over claims that it violated EU sanctions by transporting oil to Syria, but on Thursday struck a deal to return the tanker on the condition it not transport the 2.1 million barrels of crude oil on board to Syria.

Further complicating the status of the ship, the captain and crew quit, requiring the ship’s owner to provide replacements. 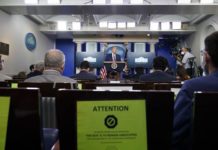