Sept. 16 (UPI) — Five GOP senators have requested Secretary of State Rex Tillerson close the U.S. embassy in Cuba if the safety of diplomats cannot be guaranteed by the nation’s government.

The request was made in a letter sent to Tillerson on Thursday and follows months of suspected sonic attacks on diplomats working in Cuba.

“Our officials and their families have been the targets of unacceptable levels of harassment and ‘acoustic’ attacks that, in some cases, have caused permanent hearing damage and other significant injuries,” reads the letter signed by Florida Sen. Marco Rubio, Texas Sen. John Cornyn, North Carolina Sen. Richard Burr, Arkansas Sen. Tom Cotton, and Oklahoma Sen. James Lankford.

The five senators, all of whom are on the Senate Intelligence Committee, said Cuba has neglected it’s duty to protect foreign diplomats and their families, and that the negligence “cannot go unchallenged.”

“We urge you to remind the Cuban government of its obligation and to demand that it take verifiable action to remove these threats to our personnel and their families,” the senators wrote in the letter.

“Furthermore, we ask that you immediately declare all accredited Cuban diplomats in the United States persona non grata and, if Cuba does not take tangible action, close the U.S. embassy in Havana.”

At least 21 U.S. and Canadian diplomats have been attacked using what officials say is an “acoustic attack” using ultrasound energy.

Two Cuban diplomats were expelled from the United States in August, after which U.S. and Cuban officials started working together to investigate the attacks, which the Cuban government has insisted it is not behind. 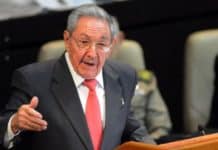