June 19 (UPI) — California Gov. Gavin Newsom apologized Tuesday through an executive order to the state’s Native Americans for the “genocide” it committed against its people.

Before 100 tribal leaders at the site of the future California Indian Heritage Center in Sacramento, Newsom said he was “ashamed” as a fifth-generation Californian for the systemic violence, discrimination and exploitation committed against the Native American population and that the only way for the state to right the wrongs it has committed is to first acknowledge what it has done.

“It’s called a genocide,” the Democratic governor said. “That’s what it was. A genocide. No other way to describe it and that’s the way it needs to be described in the history books. And so I’m here to say the following: I’m sorry on behalf of the state of California.”

The executive order, he said, codifies the apology on behalf of all Californians to the state’s Native American population for the “many instances of violence, maltreatment, neglect and murder inflicted on the tribes.”

Newsom added that he can’t suggest that the apology will reconcile the state with its past, which is why the state is establishing a Truth and Healing Council to provide Native Americans with a platform to right the historical record and do justice to “the pursuit of truth and reconciliation.”

The state’s first Native American elected to State Legislature James Ramos said the apology will go a long way to start the healing process between California and its native population.

“This historic acknowledgment by the governor marks the beginning of a new relationship between the state the more than 700,000 Native Americans who make the state of California their home,” he said in a statement.

The apology was issued in acknowledgment of the violence committed against the native Americans going back over 100 years.

In 1850, California passed the euphemistically titled “Act for the Government and Protection of Indians” law that forcibly removed Native Americans in the state from their traditional lands while separating parents from their children, adults from their families, and tribes from their languages and culture.

In his 1851 address, California Gov. Peter Burnett told the legislature that “a war of extermination will continue to be waged between the two races until the Indian race becomes extinct must be expected,” according to the executive order.

Then over the next decade, California financed private and militia campaigns with $1.29 million 1850s’ dollars against the state’s Native Americans.

The Truth and Healing Council, led and convened by the governor’s Tribal adviser, will include representatives from the state’s numerous tribes and will report draft findings on an annual basis beginning Jan. 1, 2020, the governor’s office said in a statement.

“California must reckon with our dark history,” Gavin said. “California Native American peoples suffered violence, discrimination and exploitation sanctioned by state government throughout its history. We can never undo the wrongs inflicted on the peoples who have lived on this land that we now call California since time immemorial, but we can work together to build bridges, tell the truth about our past and begin to heal deep wounds.” 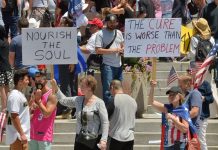 Newsom: Hair salons, barbershops may reopen in most California counties

Republicans sue to block California from voting by mail in November