Jan. 5 (UPI) — The U.S. Department of Agriculture has closed multiple offices in this government shutdown, leaving a list of services unavailable to farmers at the start of the new year.

“Right now this isn’t the sort of thing we would call an emergency,” said Will Rogers, a spokesman for the American Farm Bureau Federation. “But if it goes on for much longer it will hurt.”

The list of stalled services includes many of the same programs that have been frozen since the farm bill expired in September. They include new farmer loans, conservation programs and organic certifications.

“Farmers and ranchers have faced enough uncertainty over the past several months that the last thing that they need is further delays in USDA’s functioning and delivering of service,” the National Sustainable Agriculture Coalition said in a statement.

One of the most immediately pressing services now in limbo is a program that provides a quarterly crop harvest and price report for all U.S. crops. Traders and farmers alike rely on that report to make important business decisions for the coming year, Rogers said.

“That report can move markets,” Rogers said. “Now, they’re going to have to go on the estimates that we have.”

The office that processes applications for the tariff relief is also closed, leaving any farmers who have not already applied out of luck until regular operations resume.

Not all of the USDA’s offices are closed. Among the services that remain open are food stamps, various food inspection programs and Forest Service law enforcement, the USDA said in a news release.

If the shutdown persists, more programs will cease operating, the release said. 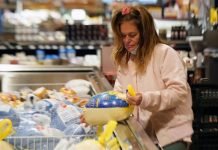