Feb. 8 (UPI) — A Puerto Rico court sentenced an Indiana grandfather to three years of probation for the death of his granddaughter who fell from the window of a cruise ship, the Puerto Rican Justice Department announced Monday.

Anello was arrested and initially pleaded not guilty, but changed his plea to put an end to the ongoing case, his lawyer said. Anello could have faced up to three years in prison in Puerto Rico.

Anello will serve his probation sentence in Indiana, his legal team said.

Anello said he picked up Chloe to let her see through the cruise ship window, and allow her to “bang on the glass,” not realizing the window was open. He said the child slipped from his grasp and fell to the deck 150 feet below.

Family members sued Royal Caribbean in U.S. District Court in the Southern District of Florida, in December 2019, saying the cruise line failed to protect Chloe by not installing a warning sign or safety devices on the open window. 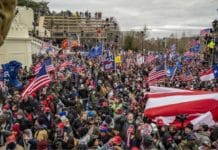