Feb. 23 (UPI) — Venezuelan National Assembly leader Juan Guaido, with the aid of British billionaire Richard Branson, had the upper hand in a confrontation of concerts as Venezuelan President Nicolas Maduro’s own “Hands Off Venezuela” fizzled, at least in its first day.

Groups started to walk to the international bridge area at sunrise to attend “Venezuela Aid Live,” organized by Guaido as a prelude to several tons of international aid entering Venezuela.

As of Friday afternoon, masses chanted “No me doy por vencido” (“I do not give up”), the lyrics of Miami-based artist Luis Fonsi, who had dedicated the song to Venezuelans.

“Venezuela. We will not give up,” the author of Despacito said in his presentation.

Maduro’s government, which said earlier in the week that it had so many artists offering to support the regime that it had to organize two days of concerts Friday and Saturday, had little public presence as of Friday morning and early afternoon, Colombia’s El Tiempo’s photographs showed.

Several well-known Latin American stars, some who have had long careers like Spain’s Miguel Bose or short ones like Colombia’s Maluma, performed at Guaido’s concert.

In the middle of the two events, there is an international bridge named Tienditas, about 1,000 feet wide, which is blocked by containers and metal fences. Maduro’s security forces blocked the bridge earlier in the week to prevent passage of aid from Cucuta, the biggest of three aid collection centers outside Venezuela.

On the Colombian side, an El Tiempo reporter was not even able to confirm names of those who would be performing at the “Hands Off Venezuela” concert, while sound checks were using recordings of Juan Carlos Vives, a Colombian artist that ironically is supporting Guaido’s efforts on the other side, the daily said.

An organizer of the Venezuelan side concert said the event could be extended into Sunday, but did not confirm the artists. The leading artists for the event to support Maduro are Omar Acedo and Chicas del Can, with other local, Venezuelan folk artists expected to play, the paper reported.

Roger Waters, one of the founders of the English pop rock band Pink Floyd, criticized Branson, saying he is taking part in a political action by the United States. He has in the past supported Maduro.

Guaido has called for humanitarian aid, claiming the lives of tens of thousands of Venezuelans depend on it as a result of what he called gross mismanagement of the country’s economy that has led to scarcity of food and medicine.

Maduro, who has denied the existence of a humanitarian crisis in Venezuela, is the only one of the two leaders supported by the military. Guaido gave the country’s military an ultimatum to switch sides and abandon Maduro by Saturday to receive amnesty.

More than 50 countries support Guaido, but Maduro also has support from several countries, including Russia, China and others that have criticized what they see as a United States action that could interfere and destabilize Venezuela. Bolivia’s Evo Morales said Friday the aid is nothing but a “Trojan War.”

The Red Cross said earlier this month that it is not participating in Guaido’s aid effort. 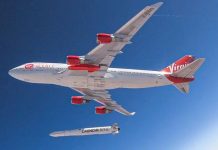 Virgin Orbit terminates rocket launch after releasing it over the Pacific