May 25 (UPI) — A Tennessee jury found a man guilty of 43 charges, including one count of first-degree murder, for a shooting at a church in Antioch.

Emanuel Samson, 27, faced the murder charge for the death of Melanie Crow, whom he shot while she walked through the parking lot of Burnette Chapel Church of Christ on Sept. 24, 2017. He then walked into the church and opened fire, injuring seven other people.

In addition to the murder charge, the jury found him guilty of multiple counts of attempted murder, civil rights intimidation and aggravated assault.

Prosecutors said they’re seeking life in prison without the possibility of parole for Samson.

Revenge was considered as a motive after police found a note in Samson’s car mentioning the shooting by white supremacist Dylann Roof on June 18, 2015, which killed nine people at the Mother Emanuel African Methodist Episcopal Church in Charleston, S.C.

Though he is a legal U.S. resident, officials said Samson, a native of Sudan, is not a citizen. 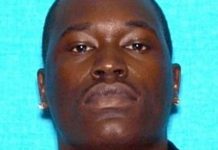 Tennessee church shooter may have sought revenge for Charleston shooting 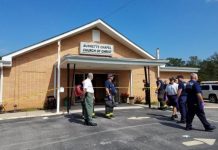