May 12 (UPI) — Gunmen killed at least one person Saturday after attacking a hotel in Gwadar, Pakistan, in response to the Chinese presence in the region.

“Our fighters have carried out this attack on Chinese and other foreign investors who were staying in PC hotel,” Jihand Baloch, a spokesperson for the Baloch Liberation Army, told Al Jazeera.

Gwadar is in southeast Pakistan, near the border with Iran.

Separatist group the Baloch Liberation Army, told officials that it sent four shooters to carry out the attack on Chinese workers and foreign investors at Zaver Pearl-Continental Gwadar.

All guests at the 114-room hotel safely escaped, according to military reports, although some reports dispute this claim, saying some guests were injured during the shooting.

Gwadar is home to the China Pakistan Economic Corridor, which connects southwestern China and the Arabian Sea.

For more than a decade, the BLA has been attacking Pakistani security forces in a fight for ethnic Baloch regions to gain independence in the Balochistan province. The BLA says the Pakistani government has exploited and plundered it for its minerals.

This episode follows an attack Thursday in which BLA gunmen killed five people at a coal mine in Balochistan, a district in Harnai.

In April, gunmen from a coalition of Baloch separatist groups killed at least 14 people on a bus traveling from Gwadar to Karachi. 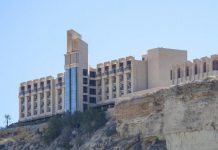